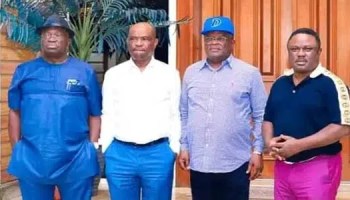 The governors of Ebonyi and Cross River States, David Umahi and Ben Ayade, met privately with Nyesom Wike, the governor of Rivers State, on Wednesday night.

Also present during the meeting was Okezie Ikpeazu, the governor of Abia State.

Following the conference, Governor Wike and his counterparts made the decision to withhold the details of what they had discussed in order to avoid spoiling the general election of 2023.

But in a talk with Newsmen on Thursday, a close friend of Governor Wike said, “They (visitors and host) clearly had no need to divulge their motivations.

“Be at as it may, the meeting was all about negotiating mutual interest for the 2023 elections, particularly for the presidential elections.

“They want to see how they can campaign and vote for a common presidential candidate. Nothing more, nothing less.

Because of injustice within the party, Governor Wike and his friends kept their ground and refused to support Atiku Abubakar, the Peoples Democratic Party’s (PDP) presidential candidate.

The PDP Governors, sometimes known as the G-5, denounced northern domination in influential party positions and demanded the resignation of Iyorchia Ayu, the party’s national leader.