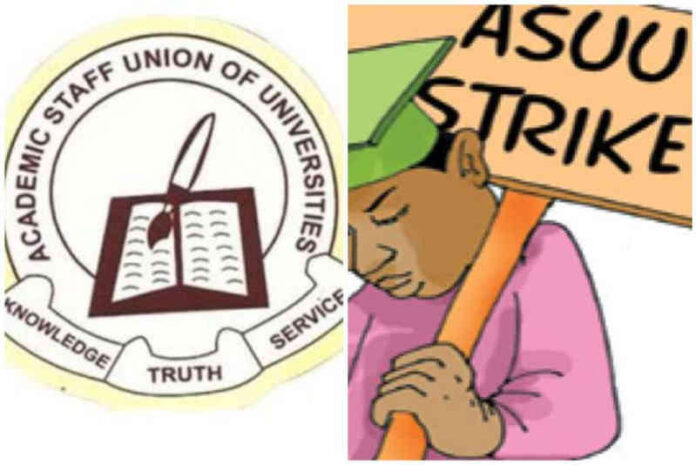 Below is the Latest update on the ASUU strike news today Monday, 14 November 2022

Academic Staff Union of Universities (ASUU) has abandoned preparations for a one-day nationwide demonstration against the Federal Government’s implementation of a “no-work, no-pay” policy for professors in the country.

According to The Punch, the demonstration will be organised at various union branches on public university campuses around the country, and it will also serve as a lecture-free day for all union members.

On Sunday, November 13, 2022, a member of the union’s National Executive Council leaked this information to the press.

According to the source, we are protesting. The government must recognise that we are not temporary employees; branches will select their own dates.

According to him, the lecturers’ salaries for the months they were on strike should be paid in full.

Recall that ASUU members were on strike from February to October of this year, crippling academic activities in Nigeria’s public universities.

After the National Industrial Court (NIC) ordered the lecturers to resume, ASUU called off their eight-month strike on October 14.

However, the Federal Government paid only half salaries for the month of October, which infuriated ASUU members.

The Federal Government had explained that professors were compensated based on the number of days worked during the specified month.

Falana, a counsel for ASUU, commented on the development on Tuesday, stating, “The ‘no work, no pay’ doctrine is completely inapplicable to ASUU members.

“We are asking all Nigerians who exerted pressure on ASUU to call off the strike to persuade the government to cease its provocation of the lecturers.

According to the Socio-Economic Rights and Accountability Project, it is illegal for the Minister of Labour and Employment, Chris Ngige, and the acting Accountant General of the Federation, Sylva Okolieaboh, to have paid members of ASUU half-salaries for the month of October 2022.

It also urged President Muhammadu Buhari to direct the Minister of Labour and Employment, Chris Ngige, and the acting Accountant General of the Federation, Sylva Okolieaboh, to immediately reverse the allegedly illegal deductions from the salaries of Academic Staff Union of Universities members for October 2022.

SERAP also requests that the President “direct Ngige and Mr. Okolieaboh to pay ASUU members their full salaries for the duration of their strike action.”

Recently, the Federal Government allegedly paid ASUU members half of their salaries for the month of October 2022. October salaries for some professors reportedly ranged from N71,000 to N121,000.

ASUU will decide on shutting down universities again in Nigeria over FG half salary payment.

Punch NewsOnline Nigeria reports that barely one month after the Academic Staff Union of Staff Universities, ASUU, suspended its 8-month industrial action, the union and the Federal Government are back on a warpath again.

This online news already reported that the National Executive Council of the ASUU is set to meet on Monday (tomorrow) to decide whether to embark on another strike or not.

The meeting, which is expected to be held at the University of Abuja campus, comes on the heels of the October salary cut received by members of the union, weeks after suspending the prolonged industrial action.

Punch NewsOnline Nigeria recalls that ASUU had on February 14, 2023, shut down both State and Federal government-owned universities over previous agreements yet to be implemented by the government.

FG Reveals Why It Paid University Lecturers, ASUU Half Salaries

FG has revealed why it paid University Lecturers and ASUU half salaries.

Punch NewsOnline Nigeria reports that the Federal Government on Saturday explained why it failed to pay full salaries to lecturers under the aegis of the Academic Staff Union of Universities (ASUU).

In a statement made available to NewsOnline Nigeria by the Federal Ministry of Labour and Employment, the government noted that members of ASUU were paid their October salary pro-rata.

According to the ministry, pro-rata was done because they cannot be paid for work not done.

The statement further clarified that the Honourable Minister of Labour and Employment, Chris Ngige, never directed the Accountant General of the Federation to pay the university lecturers half their salaries.

The statement reads in part, “Following the ruling of the Court of Appeal, which upheld the order of the National Industrial Court of Nigeria, asking ASUU to go back to work, the leadership of the union wrote to the Minister, informing him that they have suspended the strike. The Federal Ministry of Education wrote to him in a similar vein and our labour inspectors in various states also confirmed that they have resumed work.

“So, the Minister wrote to the Federal Ministry of Finance, Budget and Planning, directing that their salaries should be restored. They were paid in pro-rata for the number of days that they worked in October, counting from the day that they suspended their industrial action. Pro-rata was done because you cannot pay them for work not done. Everybody’s hands are tied.”

ASUU may be going for another showdown with the Federal Government over half salaries paid to its members for October 2022.

There are indications that the Academic Staff Union of Universities, ASUU, may go on another strike following the alleged payment of half salaries to the lecturers for the month of October 2022, by the Federal Government.

As a result, the resumption of academic activities in the nation’s universities may become truncated once again as the union is set to summon an emergency meeting of its National Executive Council (NEC).

ASUU recently suspended its eight months of industrial action following interventions from the Court of Appeal, which upheld an earlier decision from the National Industrial Court, NIC.

No date has been fixed yet, but sources said that the decision to convene a meeting followed the surprise that greeted members of the union when some of them got an alert of half salaries in their accounts for the month of October 2022.