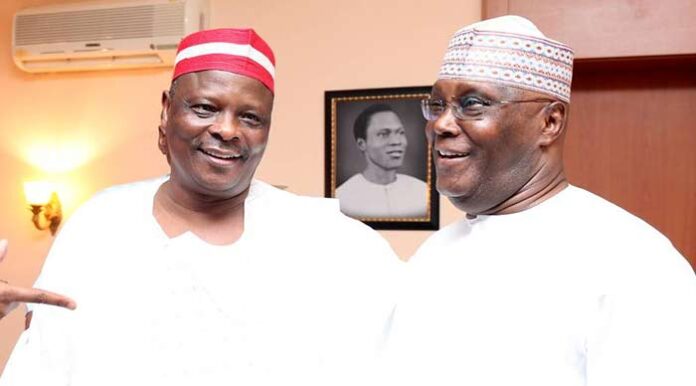 Ejesgist News reports that the presidential candidate Rabiu Kwankwaso may be in trouble since the NNPP party structure in Bauchi has joined the PDP and proclaimed support for Atiku Abubakar.

In a video that was posted on social media a short while ago, Kwankwaso’s followers could be seen brazenly removing the emblem on his cap while yelling the name of Atiku Abubakar, the People Democratic Party’s presidential candidate.

This comes after Kwankwaso arrived at Chatham House a few days prior to reassure his supporters that he would not resign for anyone, despite having previously intended to collaborate with the Labour party to realize his dream of ruling Nigeria.

“What I told them is what I will tell you. If anybody wants Kwankwaso to withdraw, just bring criteria and select the best. Anytime I have a better candidate, I am ready to talk to him,” he said.

Boasting over 30 years of experience in the civil service, the NNPP presidential candidate claimed that his party is the one growing in Nigeria, describing the LP’s media buzz as a bubble.

NNPP has been dismantled by the Atiku wave in Northern Nigeria 😂. pic.twitter.com/CjufEsHBfU

Capitol One Login : Is Your Capital One Account Restricted? Here’s How To Fix It...