Ahmadu Fintiri, the governor of Adamawa State who rose to power on the ticket of the PDP, came dangerously close to losing his life on Saturday when a truck travelling too fast struck two of the vehicles in his convoy.

The incident took place not long after the governor and a few of his commissioners boarded a black Mercedes bus after attending a wedding at the Agga Mosque in Yola, the state capital, in the affluent Dougirei neighbourhood.

Two vehicles in the convoy were crushed by the tipper truck, injuring Inspector Madu and Sergeant Isa, two police officers.

The truck driver successfully diverted the speeding truck away from the direction of the bus carrying the governor to strike the Peugeot 406 carrying a video journalist and the two injured police officers in addition to the official vehicle of the permanent secretary, Political and Security Affairs at the government house.

Also Read: Wike drops another bombshell, reveals what will happen if he is forced out of PDP

The old driver was quickly handled by police escorts and taken into custody, along with a young man who begged them to be gentle with him.

The driver was placed in a police pick-up van and driven to the city’s Jimeta Police Division. 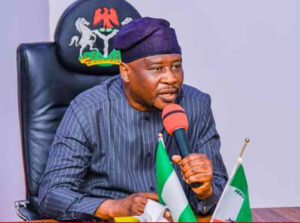 The driver was swiftly transferred to a Toyota jeep and fled the scene after receiving a personal reprimand from the governor, who was unharmed.

This development occurs just one day after the governor won in court after the Supreme Court dismissed a case that had challenged his eligibility to run for governor in 2023.