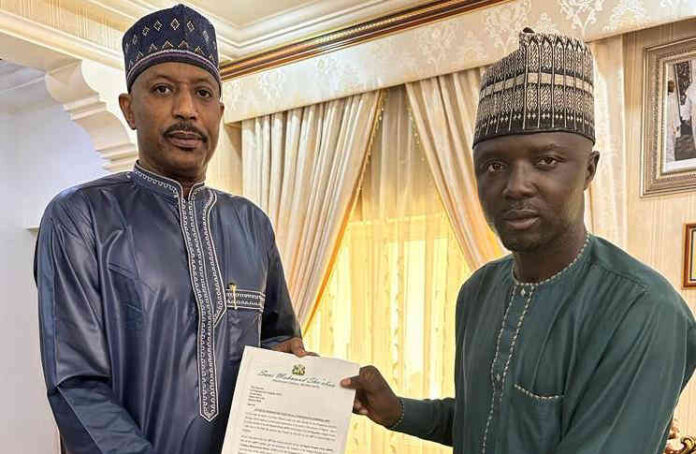 Sani Sha’aban, a former candidate for governor of Kaduna State in the All Progressives Congress and an in-law of the president Muhammadu Buhari left the party on Monday.

Sha’aban, Buhari’s in-law, whose 17 children paid N50 million for his Expression of Interest and Nomination forms to run for governor in 2023, cited injustice and impunity as his reasons for leaving the state’s ruling party.

Additionally, he said that the party’s disregard for the law led him to decide to leave it.

The governorship candidate petitioned the Federal High Court in Kaduna for exclusion from the election shortly after the APC’s state primary in May 2022, where Uba Sani, the incumbent senator from Kaduna Central, was declared the winner.

But in early November, the court presided over by Justice Mohammed Garba Umar dismissed the case, saying it lacked jurisdiction in the matter.

Sha’aban, on the other hand, continued on to the Court of Appeal, where he vowed to carry the matter all the way through despite having left the party.

The candidate for governor, Mr. Joshua Danladi Ephraim, asserted at a press conference through the director of the Sani Mahmoud Sha’aban Campaign Organization that he had no business working with a group that disregarded the law.

In a letter of resignation dated November 28, 2022, sent to Hanwa, the APC Ward Chairman,

The state official in Sabon Gari Local Government Area continued by saying that recent events within the party had forced him to reevaluate his affiliation with it.

He added that despite his best efforts, advice, and intentions, the party had alienated the majority of the population.

He responded that he would have to consult “those who have to love us of where next to move to” when asked about his next political move.

Part of Buhari’s in-law, Sha’aban’s letter read, “Recent activities and events within the APC, in particular in Kaduna State, have forced me to reconsider my membership in the APC.

Disappointingly, the APC in Kaduna State is now seen as synonymous with hardship, division, and complete disregard for human lives, communal values, and family values.

This has happened despite all of our best efforts, warnings, and intentions. Instead of fostering peace, social cohesion, and integration in Kaduna State as we had envisioned and worked for, the APC is now seen as synonymous with hardship, division, and total disregard for human lives, communal values, and family values.

“Some few APC members in Kaduna State have hijacked the party structure and turned it into their personal estate to serve their personal greed and avarice, benefiting only their families, friends, and cronies, instead of working to bring the benefits of democracy closer to the masses.

Even the many Party members who backed them as well as the Kaduna State populace as a whole are of no consideration to them in the slightest.

“As someone who places a high value on the commonwealth of the land and who has a firm faith in God, I have discovered that I cannot, in good conscience, stand by and let this reign of impunity continue in silence.

I have had occasion to voice my displeasure with the APC’s policies and deeds in Kaduna State to you on a number of occasions.

As you are aware, because of my support for the Rule of Law, Social Justice, and Equity, we have come to be regarded with contempt by those who stand to gain personally from the APC’s distorted realities.

You have repeatedly disregarded my numerous warnings, protests, actions, and best efforts to save the Party and bring it back into focus in order to accomplish the goals that were established when the Party was formed.

However, there are restrictions on what I can accomplish as a Party member.

“I feel that, in the eyes of God, I have done everything I could to halt the inevitable, but in vain.

In light of the current state of affairs, where the interests of the majority of ordinary people are not given much consideration, I have come to the firm conviction and resolution that I cannot, in good conscience, continue to be a member of the APC.

“I can not stay in a party that does not care about people’s lives, social cohesion, peace, or our long-valued and cherished communal and traditional values. When the APC shows no respect for the Rule of Law and the most basic laws of the land, I am unable to stay in the party.

I hereby officially and formally resign from all levels of membership in the All Progressives Congress, effective immediately.