A decision has been made to remove the senator who represented the Taraba South senatorial constituency, Emmanuel Bwacha.

The Federal High Court that was sitting in Jalingo dismissed Senator Emmanuel Bwacha from his position because he had switched parties, going from the People’s Democratic Party (PDP) to the All Progressives Congress (APC).

The People’s Democratic Party (PDP) in Taraba State had petitioned the court to rule that the lawmaker’s seat was vacant since he had defected from the party on which he had been elected.

In his judgement, the judge who was presiding over the case, Justice Simon Amobeda, instructed Bwacha to immediately relinquish his seat.

On February 3, 2022, Senator Bwacha, who is also the deputy minority leader of the Senate, switched parties and joined the APC. 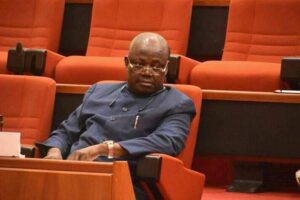 At a ceremony held at the State House, President Muhammadu Buhari formally welcomed Bwacha into the APC, which is now in power.

Governor Mai Mala Buni, who is also the chairman of the interim committee for the ruling party, was the one who escorted the federal congressman from Taraba to the Presidential Villa.