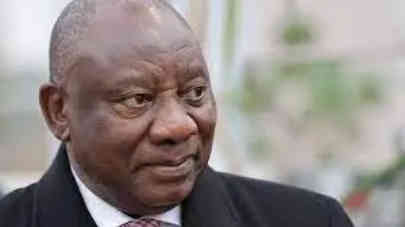 Cyril Ramaphosa, the president of South Africa, has lost the support of his party, the African National Congress (ANC), and may resign as a result of a report that he violated the constitution.

Ejesgist.ng gathered that the president is “very likely” to announce his resignation as president in the coming hours.

Deputy President David Mabuza, a former premier of Mpumalanga, will serve as acting president in accordance with the Constitution until Parliament elects a new leader.

According to information obtained by this online newspaper, Ramaphosa will also resign as ANC leader and not run for reelection.

It is anticipated that whoever wins the mid-December ANC presidential vote will be sworn in as state president during a special session of Parliament.

According to a dependable source, Ramaphosa did not need to be persuaded of the case in order to resign. He claimed that the president had stated that his resignation would be best for the stability of the nation.

The source said, “At this point, there is nothing we can do.”

As a result of the fallout from the publication of the report on Phala Phala, he came under increasing pressure to resign.

Serious accusations were levelled against Ramaphosa by the Section 89 panel, which was led by retired Chief Justice Sandile Ngcobo.

In the ‘farmgate’ scandal known as Phala Phala, Ramaphosa was charged with kidnapping and bribing the burglars to remain silent while covering up a $4 million theft from his farm in 2020.

He may have violated an anti-corruption law, according to a three-volume investigation report that found him to have abused his power.

Ramaphosa has denied any wrongdoing and claimed that the only money taken was $580,000.