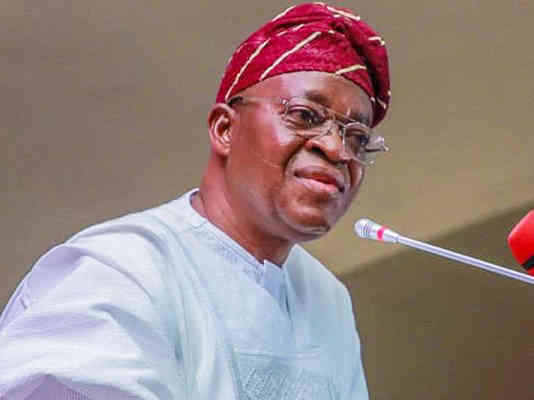 Adegboyega Oyetola, the recently-departed governor of Osun, asserted that his administration left N14 billion in the State’s coffers.

Oyetola claimed that his administration successfully repaid N97 billion of the total debt it had inherited when he took office in 2018.

He claimed that since taking office, his administration has successfully adhered to its election promises by not borrowing a single dollar from anyone or any institution in the world to finance the State’s economy.

In his farewell address to the state’s citizens, Oyetola mentioned the end of his first term in office.

On November 27, 2018, he was sworn in to succeed his predecessor, former governor Rauf Aregbesola.

Oyetola and the All Progressives Congress, his party, are contesting the Independent National Electoral Commission’s (INEC) declaration that Senator Ademola Adeleke won the most recent governorship election at the Osun State Governorship Election Petition Tribunal, located in Osogbo.

Oyetola claimed that his administration has strengthened Osun’s economy through the numerous projects that are people- and mass-focused that are swiftly and timely carried out to improve the quality of life for the State’s citizens.

He claimed that Osun had experienced economic stability under his leadership, as evidenced by the state’s GDP’s astronomical growth since he took office.

Oyetola declared that Osun is economically more stable than when he first encountered it in 2018, adding that despite all the obvious socioeconomic issues the State was facing and their effects, he was able to address the worries and evil of fiscal irresponsibility and lack of implementation, which impede projects and services in the country’s public service.

“I thank God and I thank you for your support, cooperation, and prayers over the years as I step down today at the end of the four-year term you freely granted me.

“I remember how the journey started four years ago; how you exercised your right to vote for me because you believed in me and our Party’s plans and programs.

“As we conclude this first tenure, we are confident that we didn’t break our promise to you or let you down. We stayed true to our election promises and our word to you. Although we desired to continue serving you, we are unable to do so due to the results of the July 16 governorship election, which we are currently contesting in court.

Read Also Tinubu Mentality Questioned as he suffers another gaffe, asks Lagosians to “go and take your APV”

“As a law-abiding government and citizen, we are stepping aside to let the legal process play out.

“However, we hope to continue helping you in the near future. We have complete faith in God that we will return soon, just as we have implicit faith in the judiciary to uphold the rule of law in the case at hand.

“We are optimistic that this brief political eclipse will end. The sun will rise once more, brighter and warmer, and the participatory governance and sustainable development that we enshrined—both of which have received praise from national and international organizations—will be revived and placed on a more secure and solid foundation.

“In a democracy, there is no substitute for people-centered and development-savvy governance. The unprecedented good governance, inclusive, and participatory governance we enacted—which resulted in enormously equitable projects and programs—has too deep of a root system to be uprooted.

“Relax, Osun is economically more stable than we found it in 2018, and it remained the most peaceful state in the nation under our leadership as we come to the end of our first term.

“We didn’t use any bank loan facilities for four years. But just as we have paid N97 billion from the total debt we inherited in 2018, we also benefited from the N3 billion monthly intervention from the federal government to all the States for six months to mitigate the effect of deductions from the budget support facility and salary bailout accessed by the previous administration.

“We’re leaving behind over N14 billion in cash. Another N8 billion is anticipated between December and January from our performance in SFTAS and the IGR, in addition to the N14 billion in cash. Additionally, the State will soon receive another $72 million from RAMP 3, NG-CARES, Nigeria for Women Project, and Ease of Doing Business. These are acquired through performance. Indeed, we have worked hard to earn them. It was a component of the same performance that recently earned us the World Bank’s States’ Fiscal Transparency, Accountability, and Sustainability, SFTAS, awards for Best Governor on Efficiency of Public Expenditure and TOP Performer on Domestic Revenue Mobilization.

“We went to this length to assure you that Osun was viable under our direction. It was accomplished through personal sacrifice and financial restraint.

“On behalf of our team, I urge you all to uphold the law and diligently work to create the Osun of our dreams. For the benefit of our community and future generations, we will keep working together to repair the State’s damaged walls and restore her glory. Thank you all, and may God keep Osun in his blessings, continued Oyetola.

PVC Collection Deadline: All you need to know about new PVC Extension date

Nigerian Army reacts to attacks on INEC offices, reveals next line of Action