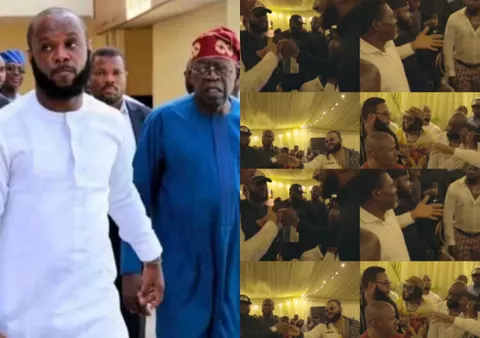 Seyi Tinubu, son of Bola Tinubu, the presidential candidate of the All Progressives Congress (APC), has met with celebrities and stakeholders from the south-east ahead of the 2023 general elections.

On Wednesday, November 30, The APC presidential campaign council shared a clip from the meeting on its Twitter page.

In the tweet accompanied with that video, the campaign council said the meeting was to consolidate Tinubu’s presidential bid.

Seyi Tinubu also took to his official Instagram page, and shared a clip of himself exchanging pleasantries with the Yul Edochie and controversial preacher Chukwuemeka Ohanaemere also known as Odumeje who also attended the event as ‘Cultural Praise’, a song by Kcee and Okwesili Eze Group, played in the background.

2023: I Will Defeat APC Presidential Candidate Tinubu By A Landslide – Atiku Boasts

Others present were E-Money, Kanayo O Kanayo and White Money, who are from Anambra State.

However, details of where and when the meeting took place were not disclosed.

Tinubu is one of the leading presidential candidates alongside Peter Obi of the Labour Party (LP) and Atiku Abubakar of the Peoples Democratic Party (PDP).

Unrest in Tinubu’s camp over lackadaisical attitudes of Buhari presidency

ABOUT US
Ejes Gist News is a trusted and registered online news platform, and you should only read news from people who know what they're talking about.
Contact us: [email protected]
FOLLOW US
© 2022 Ejes Gist Ng | Alright Reserved | Published by Ejes Gist Media Limited
MORE STORIES
Awards and Honours