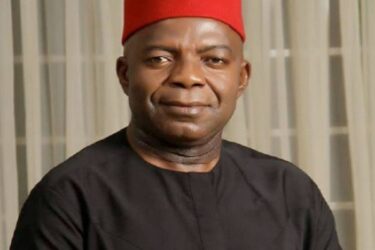 Dr. Alex Otti has announced his resignation from the APC governorship primaries in Abia State.

The All Progressives Grand Alliance (APGA) governorship candidate in 2015 and 2019 indicated he will run for office in another party.

He pulled out less than 24 hours before the activity started.

In a statement issued by his media aide, Ferdinand Ekeoma, Otti, who joined the APC a few years ago, said that he was compelled to withdraw from the APC gubernatorial primary due to the imposition of an unpopular aspirant.

In a statement headed “Withdrawal from the APC Governorship Primaries,” the APC chieftain said his decision was formed out of his dedication to ensuring the dawn of a new era of progressive and people-oriented leadership in the State.

“That there is no place for compulsion or imposition of candidates in the party’s Constitution or election act, therefore the wise provision for either Direct Primaries, Indirect Primaries, or Consensus as acceptable forms of electing candidates.”

“That, although the other hopefuls pledged to rally around and support any contender who wins the governorship primaries in a free and fair election, one aspirant, who clearly knows he doesn’t stand a chance in a real election, chose to align with outside forces to be imposed on the party.”

“However, we firmly opposed it because we knew that any product of imposition seeking the governorship ticket in the APC at this time in Abia would have little chance in the general election.”

“It is my sincere view that anyone seeking to lead Abia state and Abians must be democratically elected by the people, rather than imposed by undemocratic or external forces pursuing self-serving agendas that would jeopardise Abians’ long-term welfare and well-being.”

“That my dogged drive and stated dedication to ensure the dawn of a new era of progressive and people-oriented leadership has been empowered rather than dampened, since I know that no great revolution has ever occurred without hitches and setbacks.”

“Because we are on a voyage of Abia redemption, and because the leadership calamity that has befallen Abia since the return of democracy in 1999 has not abated, we do not intend to stop halfway, as that would be a tragedy of epic proportions for our people who have been on a long search for good governance that would provide them with a well-deserved reprieve.”

“That, in view of the foregoing circumstances, I hereby resign from the All Progressives Congress’s predetermined governorship primary scheduled to take place in the coming days.”

“This well-considered decision was reached after extensive consultation with our army of followers, stakeholders, and, most importantly, recognised APC leaders within and outside Abia state.”

“Finally, we want to reassure our throngs of supporters and well-wishers that, having been lavishly blessed and equipped by God, there is no reason to be concerned about this development, as we are more than ever determined to pursue our ambition on another platform, and will do everything in our power to ensure we convincingly and legitimately win the mandate of our people in 2023.”

Ikpeazu agreed to dump Wike’s G-5, was in my house after his preferred governorship candidate lost rerun primary – Ayu

JUST IN: “No PDP member will be allowed to vote in the elections” Thugs Say as they Attack 8 Top PDP chieftains