This online newspaper gathered that Zemi passed away early on Wednesday morning at the age of 96.

In Shanghai, he succumbed to leukaemia as well as failure of multiple organs.

The late Chinese leader oversaw a period of rapid economic development and widespread opening during which China experienced unprecedented levels of economic freedom. 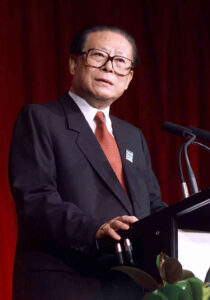 After the violent crackdown on protestors in and around Beijing’s Tiananmen Square in 1989, which led to China being shunned by the international community, Jiang rose to power and became the leader of China.

The event sparked a vicious power struggle between reformers and reactionaries at the top of the Communist Party, and it lasted for a long time.

Because of this, Jiang, who had previously been regarded as a dull bureaucrat, was promoted to a position of prominence in the government.

He was selected to be the leader of the compromise in the hopes that he would bring together more conservative and more liberal elements.

Under his leadership, the Communist Party was able to strengthen its hold on power, and China rose to its current position as one of the leading powers in the world.

Thanks for using our platform to learn about the latest Naija News on Former president Chinese President, Jiang Zemi dies at 96