JUST IN: Prominent Nigerian politician dies Less than a Month to Elections [PHOTO]

JUST IN: Prominent Nigerian politician dies Less than a Month to Elections [PHOTO]

Biyi Adeshina, also known as D Don, was a former board member of the Oyo State Sports Council and a former Senior Special Assistant (SSA) on Information and Orientation to the late Governor Abiola Ajimobi.

The circumstances of Adeshina’s passing were unknown, but on Monday Isaac Fayose, the younger brother of former Ekiti State governor Ayodele Fayose, confirmed that Adeshina had passed away. 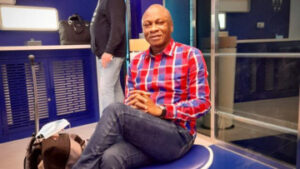 Also Read: Lady Loses Her Child After Giving Him Tramadol and Locking Him Inside To Go Clubbing [PHOTOS]

The deceased was the director of the Biyi Adeshina Foundation, an NGO that works to “alleviate the plight of the need.”

This online newspaper is aware that the Foundation has helped widows, aged people, people with disabilities, and pensioners.

Thanks for using our platform to learn about the latest Naija News on Popular politician, Biyi Adeshina dies