Azeez Aminu Dayo, a prominent figure in Nigerian football, has passed away.

This online newspaper reports that Azeez Aminu Dayo, a midfielder for MFM FC, reportedly passed away.

On Monday night, a former teammate of Dayo’s who currently plays for Enyimba F.C. confirmed the sad news.

The current teammate said that the specifics and the cause of the young footballer’s death are still unknown.

The late athlete was a member of the MFM team that participated in the 2021-22 season of the Nigeria Professional Football League (NPFL). 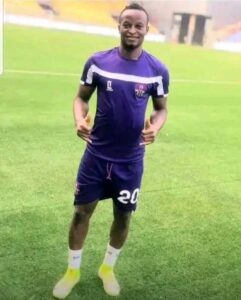 Dayo wore the number 20 jersey for MFM and was affectionately known as “Deco.”

This nickname was bestowed upon him as a praise for his resemblance to the legendary Portugal and Barcelona player Anderson Lus de Souza.

Although, The club that Dayo played for, MFM FC, has not yet issued a comment regarding the player’s passing as of the time this story was written.

However, tributes have been flooding in from all across the country for the player who passed away yesterday.

Thanks for using our platform to learn about the latest Naija News on Tears As Nigerian Football Star, Azeez Aminu Dayo Dies