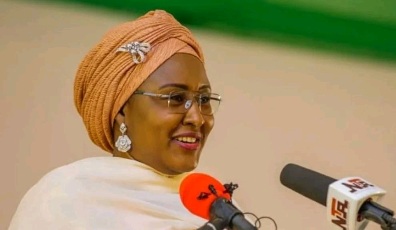 The National Association of Nigerian Students (NANS), the student government of Nigeria, has called for a national protest in reposnse to Aisha Buhari Arrest of Aminu Muhammed.

The protest is in response to the arrest of a student and is directed at Aisha, the wife of President Muhammadu Buhari, and Usman Baba, the Inspector-General of Police.

Read Also: “Nigerians Should Speak Up Now” — Police Commissioner Calls For Arrest Of First Lady For Taking The Law Into Her Hands

Aminu Muhammed, a student at the Federal University in Dutse, Jigawa State, was detained, arrested, and placed on remand after criticising Aisha Buhari on Twitter.

As previously reported, Muhammed, a final-year student in the Department of Environmental Management and Toxicology, tweeted in June 2022 that Mrs. Buhari had gained weight after participating in the looting of the country’s meagre resources while the masses suffered under her husband’s rule.

The first lady’s frequent trips to Dubai are well-known.

The tweet’s loose translation is “Mama has eaten poor people’s money and is now full,” and it was posted alongside a photo of Mrs. Buhari.

His friends claim that he wrote the post out of frustration with the protracted nationwide university strike.

The eight-month strike began in February 2022 and was over in October.

On November 8, however, security personnel picked up the 23-year-old student on campus, and he was reportedly beaten up after his arrest around noon.

Muhammad was reportedly secretly arraigned in court on Tuesday.

Usman Barambu, the national president of NANS, expressed his disapproval of Muhammad’s ongoing detention in a statement.

On Monday, December 5, Barambu also announced a nationwide protest in opposition to the police and First Lady’s brutal actions.

Thanks for using our platform to learn about the latest Naija News on NANS Declares Nationwide Protest Against Detention Of Student On Orders Of First Lady, Aisha Buhari