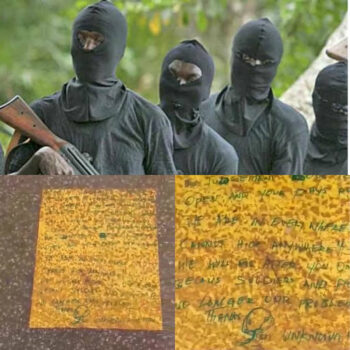 Unknown gunmen in Anambra state have threatened to kill additional lawmakers. This comes after Hon. Okechukwu Okoye, a politician who represented Aguata II constituency in the Anambra State House of Assembly, was killed and beheaded.

Okoye was kidnapped in Aguata on May 15, but his head was discovered on Saturday, May 21 in Nnobi, Idemili South Local Government Area of the state.

According to a resident of Nnobi, a message was left next the head of Okoye and dumped by the roadside.

“The killers promised that more heads will roll in the note. Due to rain drops, the letter was hazy, but it began with the word “warning.” ‘Everywhere you walk, you cannot hide anyplace,’ it said at one point. We’ll go after you one by one because military and cops aren’t our problem anymore.”

Meanwhile, the state government of Anambra has offered a N10 million reward to anyone who can help apprehend the gunmen who killed and beheaded Okoye.

That is the latest Naija News Today on Panic as Unknown Gunmen vow to kill more lawmakers in Anambra.