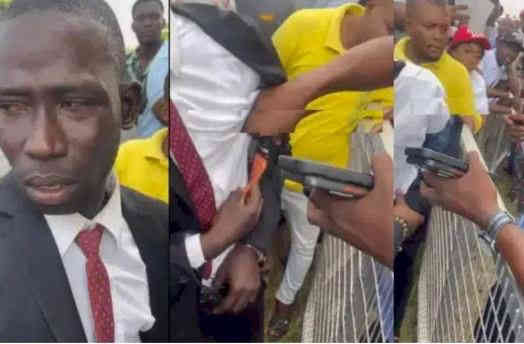 The Oyo State Command of the Nigerian Police Force has provided additional details regarding the arrest of a man who was found in possession of a double-faced Jack knife at a Labour Party presidential campaign rally in Ibadan, the capital of Oyo State, according to the Daily Post.

Remember how Twitter trended a video of the man who was found in possession of the weapon at the Lekan Salami Stadium in Adamasingba, Ibadan?

According to some eyewitnesses, the suspect stood where Peter Obi, the presidential candidate for the Labour Party, was supposed to cross to get to the podium.

Additionally, according to reports, the former governor of Anambra was the target of an assassination attempt on Wednesday.

The Oyo State Police Public Relations Officer, SP Adewale Osifeso, however, claimed in a statement released on Saturday that the report was false, misleading, and the creation of the author’s imagination.

Read Also: Rescued Chibok Girls Begging to Go back to their Abductors &#8211; Police

The event was “characterised with effective deployment of operational, tactical and intelligence assets which was monitored under the highest levels of professionalism,” according to the PPRO’s preliminary investigations.

The suspect, identified as Lateef Wasiu, was detained by “Police operatives stationed at the venue for being in possession of a concealed weapon, a double-faced Jack-knife on the inside of his suit in violation of the 2022 Electoral Act and other governing regulations,” according to the command’s spokesman.

Contrary to widespread, unfounded rumours, Mr. Peter Obi, the presidential candidate of the Labour Party, was not the target of an attempt on his life, the Command asserts in this statement.

Lateef Wasiu has already been charged with a crime, according to the statement.

Thanks for using our platform to learn about the latest Naija News on Police Identify, Charge Man Caught With Dagger At Peter Obi’s Ibadan Rally To Court