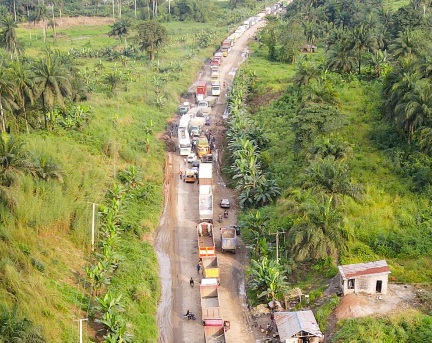 Respite came the way of commuters, passengers, traders and mourners as Sermatech construction giant intervened in a bad spot at One man village, after Okoyong junction along the Itu–Odukpani highway, who were stranded for about three days.

Respite came the way of commuters, passengers, traders and mourners as Sermatech construction giant intervened in a bad spot at One man village, after Okoyong junction along the Itu–Odukpani highway, who were stranded for about three days.

The bad portion handled by a foreign company, Julius Berger, failed leaving commuters, traders, and those conveying corpse to neighbouring Akwaibom State as well as Akamkpa and the central, northern senatorial districts of Cross River, stranded for three days.

Heavy duty Trucks and vehicles fell on the bad portion, rendering commuters and other road users impassable occasioned by the negligence of the company, Julius Berger, handling the said portion who could not apply the palliatives so needed to make the said portion fit for vehicular movement.

Motorists had to spend three days and three nights at the failed portion as the traffic gridlock was unbearable rendering even those conveying corpse to their destined areas, to weep more.
Touched by this, Sermatech Nigeria limited, not minding her job schedule had to intervene at the said portion, which is outside its job scope, by embarking on remediation job all the nights, with the application of stonebase and laterite to ease the traffic gridlock.

Representative of Sermatech, Ento Edako, who briefed the press at the spot intimated that the remedial work was carried out as part of the company’s corporate social responsibility to its host community.

He said, “we cannot be doing our job joyfully while seeing commuters and other road users stranded here, just because it wasn’t our job portion.”

According to Edako, “this particular portion of the road was under the purview of Julius Berger, but Sermatech had to intervene in order to ease the gridlock while ameliorating the pains of commuters who are left stranded for days and nights here.”

He explained that Sermatech had to deploy its staff all night to work on the bad spot, not minding the company responsible for the bad portion, in its resolve to unlock the gridlock and put smiles on the faces of the road users.

“Edako assured that the intervention by Sermatech will last longer even amidst rains, as relevant materials and equipment including stonebase and laterite were introduced, unlike what was done by the sister company that led to the failed portion.”

A transporter, Michael Anya, who was conveying a corpse from Uyo to Ogoja commended the efforts of Sermatech for intervening in the said bad portion.

“These foreign companies are not worth doing business with, we have our indigenous contractors that knows our soil too well and knows the job very well, government should use them and stop patronizing these foreign contractors that only come to enrich themselves while leaving us in abject penury,” Anya concluded.

For an indigene of Odukpani, Silas Effiom Otu, “sometimes I wonder why our government will leave indigenous companies only to patronize foreign companies on roads that our people can adequately handle.”

He rhetorically asked, “is it that the foreign companies are cheap or our government believe in the big name?” He added, “Let us go for ours and get best results, see now that it has failed, where is the foreign company that handled it?”
An Aba based crayfish trader, Mrs Nkese Coco Bassey, said in pidgin, “I thank this people and company wey come help us. I hear say no be their work but dem come help us, make God bless them well well.”

See the photos below…. 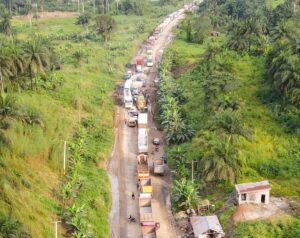 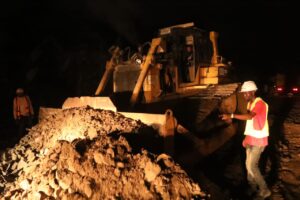 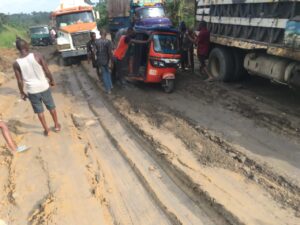