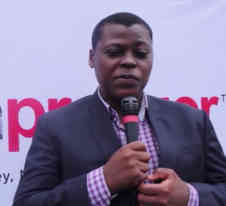 Arise TV presenter Rufai Oseni was stopped for utilizing the BRT lane, and a video of their confrontation has gone viral online.

Recall that on Monday, August 1, Rufai rushed to Twitter to criticize the police officers who had stopped him for using the BRT bus lane.

He claimed that while forcibly taking away his automobile, the officers brandished a gun at him. He acknowledged his wrongdoing and expressed his willingness to pay the fee. But he was angry about how the police handled him.

After his bad encounter with the officers, he is shown threatening to call the state governor in this new footage.

Speaking through his handle, he said that a police officer had pulled a revolver on him, taken his car keys by force, and fled the scene.

He claimed that “a Nigerian police officer pointed a gun at me, snatched my keys forcibly, and drove off with my car to enforce a traffic penalty.”

In response to Rufai’s tweet, Hundeyin stated that the morning show co-host for Arise Tv ignored the officers and resisted them after driving through a BRT lane.

“Rufai, let’s not do this,” he wrote. You acknowledged passing a BRT lane to me. It is prohibited by law. Your assertion that Google Maps guided you there is untrue.You fought the cops and disobeyed them. Upon verification, we will discipline the offending officer.

A Nigerian police officer pointed a gun at me and forcefully took my keys and drove my car off, because he wanted to enforce a traffic infraction