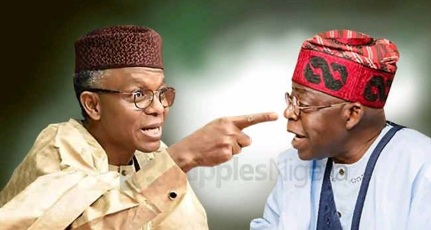 Governor Nasir El-Rufai of Kaduna State has revealed that it would be tough for the All Progressives Congress (APC) to defeat his Oyo State counterpart, Seyi Makinde, in 2023.

El-Rufai stated this at the commemoration and send-off ceremony organised for the outgoing director-general of the International Institute for Tropical Agriculture (IITA), Nteranya Sanginga, on Friday.

The Kaduna governor, however, said APC will try its best to unseat Makinde, but it would be tough because he has governed well.

Both governors recounted how they argued during a National Executive Council (NEC) sitting, over if to lock down their states in the heat of the COVID-19 outbreak.

“After that debate, I went back to my state and I locked it down. Seyi (Makinde) went back to his state and did a partial lockdown. But he locked himself down because he got COVID.

“In my state, I did what I felt was the right thing and he did what was best for his state.

“We’ll do our best to defeat you. But I know it will be tough because you have been a good governor,” El-Rufai said.

Tinubu and G-5 Governors Meet In Europe To Finalise Deal On 2023, As Asiwaju’s Camp Agrees To Respect All Agreements