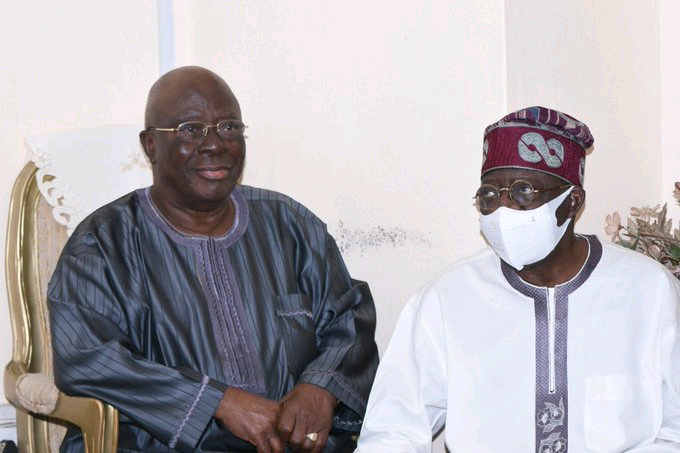 According to Mr. Adebanjo, Afenifere had previously endorsed Peter Obi of the Labour Party (LP) for the election the following year out of moral obligation.

Ayo Adebanjo, the head of the pan-Yoruba sociocultural organization Afenifere, has charged Bola Tinubu, the APC’s presidential candidate, with buying some of the organization’s members in order to sow dissension before the general election in 2023.

In an interview with Peoples Gazette on Sunday, Mr. Adebanjo made the accusation and stated he wasn’t ready to work with Mr. Tinubu, who he claimed had bribed a few Afenifere members to gain favor with him as he campaigned.

He insisted that Afenifere had already endorsed Peter Obi of the Labour Party (LP) for the next year’s election based on principle.

“Tinubu bribed some people with little money to put up a show that there’s a division in Afenifere. I won’t engage him and those he gave money to because we have already made our position clear that Peter Obi is our candidate. Peter Obi as president will serve our interest better than Tinubu,” Mr Adebanjo told The Gazette on Sunday in a telephone chat.

The latest reaction from Mr Adebanjo is coming following Mr Tinubu’s visit to Reuben Fasoranti, a foremost leader of Afenifere, at his hometown of Akure, Ondo capital, on Sunday.

Mr Adebanjo, who took over as the leader of the Afenifere in March 2021 after Mr Fasoranti, 96, stepped down from the leadership of the pan-Yoruba group during a meeting held at his residence, had consistently expressed his disavowal to Mr Tinubu’s presidential bid.

The Gazette had reported how the APC presidential candidate shortly after his arrival immediately went into a close door meeting with Mr Fasoranti where he received the “blessing” of the Afenifere leader.

However, some members of the pan-Yoruba group, which included Mr Adebanjo and the Secretary-General, Sola Ebiseni, completely stayed away from the meeting held inside the compound of Mr Fasoranti.

During the visit, Mr Tinubu was endorsed for the 2023 presidency by the leaders of the Afenifere, who attended the meeting amid the division in the pan-Yoruba group.

The leaders of the group, who were from the six South-West states including Kwara and Kogi, said that the APC presidential candidate remained the best choice for Nigeria.

Speaking on behalf of the Afenifere leaders, Sehinde Arogbofa, the group’s former General Secretary, said Mr Tinubu is a true son of Yoruba land, hence their support for him in the 2023 election.

Mr Arogbofa told Mr Tinubu to address the issue of insecurity and restructuring with all seriousness if elected the next president of Nigeria.

He also pleaded with the APC presidential candidate to be a leader that will unite Nigeria and work for the progress and development of the country.

“You are not just a Yoruba man but a Nigerian. When you become President, consider Nigeria in all you do but never forget home.

“Our demands are what you know already. Restructuring, security, and fixing the economy. Our country is no longer safe. We want state police so that the country will be safe,” the Afenifere leader said.

While presenting his manifesto tagged “Renewed Hope” to the Afenifere leaders, Mr Tinubu said has continued to receive massive support for his presidential ambition from the North adding that he would be fair to all regions if elected.

He added that his ambition was to turn things around for the better in the country, boasting that he would win the 2023 election.

“So, anybody that would defeat me in the race shall sweat,” Mr Tinubu added.

Panic in Edo Community As 10 Dead Bodies Found Inside Bush