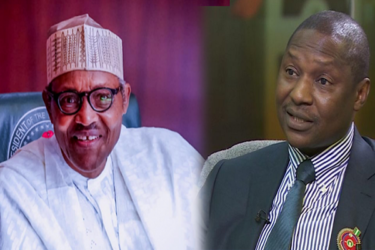 Nnamdi Kanu, the arrested leader of IPOB, has been charged by the federal government with seven new counts of terrorism.

This online newspaper gathered that all of the accusations against the IPOB leader that had previously been upheld by the trial court were included in the revised charge with the file number FHC/ABJ/CR/383/2015 that was filed before the Federal High Court in Abuja.

The Federal Government (FG) specifically claimed that Kanu, who is currently detained by the Department of State Service (DSS), had issued a lethal threat to anyone who disobeyed his sit-at-home order in the South Eastern region of the country in a broadcast that was heard and heard throughout Nigeria as a member of an illegal group.

It informed the court that because of the threat, banks, schools, markets, shopping malls, and fuel stations located in the Eastern States of Nigeria have kept their doors locked, preventing both pedestrian and vehicular traffic from moving.

The FG further asserted that between 2018 and 2021, the IPOB leader conducted broadcasts that were heard and received in Nigeria and incited people to kill and hunt down members of the Nigerian security forces and their families, violating Section 1(2)(h) of the 2013 Terrorism Prevention Amendment Act.

Further, it claimed that Kanu gave orders to IPOB members “to manufacture bombs,” and that between March and April 2015, the defendant “imported into Nigeria and kept a Radio Transmitter known as Tram 50L concealed in a container of used household items which you declared as used household items in Ubulisiuzor in Ihiala Local Government Area of Anambra State within the jurisdiction of this Honourable Court, and you thereby committed an offence contrived.”

Kanu previously entered a not-guilty plea to the accusation.

The parties will debate whether FG might proceed with re-arresting the IPOB leader on the new charge despite the Court of Appeal’s October 13 decision exonerating him of all charges and the ongoing Supreme Court appeals on the matter.

Thanks for using our platform to learn about the latest Naija News on FG moves to re-arraign Nnamdi Kanu, files 7-count amended charge

Why Courtroom put aside conviction of EFCC boss

Babachir Lawal dares APC to sack him for Supporting Obi, Vows to do the Unthinkable