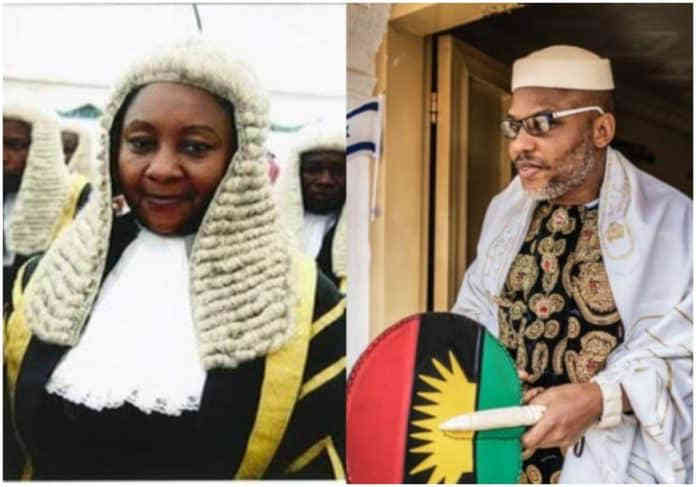 Nnamdi Kanu, the leader of the Indigenous People of Biafra, has been denied bail by Justice Binta Nyako of the Federal High Court in Abuja (IPOB).

In her ruling on Kanu’s bail application, Justice Binta Nyako stated that the issue of Kanu’s absence in the past, dating back to 2017, must be resolved before his bail application can be considered.

Kanu also broke his previous bail conditions, according to her, and his current bail application is immature until that is heard.

The Federal Government filed a six-count amended charge against Kanu on Wednesday morning, ahead of the decision on the bail application.

However, Justice Nyako chastised the prosecution for filing an amended charge just hours before the decision. She said she didn’t find out about the amended charge until she arrived at court the next morning.

The prosecution, she claims, cannot present the new amended charge to the court on the morning of the hearing.

The court noted that Kanu’s trial had been delayed numerous times since 2015 due to over 19 interlocutory applications filed in the case.

As a result, it pleaded with the parties to allow the case to go to trial so that the charge could be determined.

Chioma Jasmine Okafor: Mr Ibu’s Daughter Ends Her Marriage With Her Husband After a Heartbreaking...