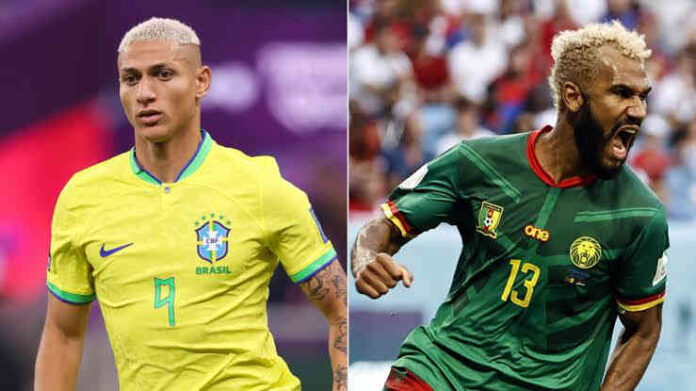 Cameroon have beaten tournament favourites Brazil 1 – 0 thanks to a beautiful header by Vincent Aboubakar in the added time of the second half. This is a momentous occasion, as Cameroon have become the first African country to beat Brazil at any World Cup tournament.

Having already secured qualification for the Last 16, Brazil rotated the starting lineup to rest the first team players and give the opportunity to those that have warmed the bench in the first two matches, with 39-year-old Dani Alves captaining the side.

The first real chance of the game was a Martinelli powerful header that was saved by Cameroon goalkeeper Devis Epassy Mboka in the 14th minute. Serbia 0-1 Switzerland: At the other end, Dusan Tadic is doing his best to spark a Serbian revival.

The 34-year-old tries to dink a ball through to Aleksandar Mitrovic, but it’s cut out by a Swiss defender.

Brazil is already assured of a spot in the round of 16, but they need one more point to clinch first place.

If Switzerland were to win, they would advance; however, if Brazil were to avoid defeat, they would only need a point.

Cameroon is required to win and must hope that the other game will either end in a draw or be won by Serbia.

To advance, Serbia needs to win and hope that Cameroon does not win; if both teams win, it will come down to goal differential.

To advance to the quarterfinals of the 2022 World Cup, Cameroon must defeat Brazil at the Lusail Iconic Stadium.

Cameroon must win and hope for either a draw or for Serbia to defeat Switzerland by one goal in the other Group G match, while Brazil only needs a point to finish first. Cameroon has only one point from their first two games.

Stay tuned as we bring you all the latest updates from the final day of World Cup group-stage action.

Portugal vs South Korea: South Korea defeat Portugal to qualify for the round of 16