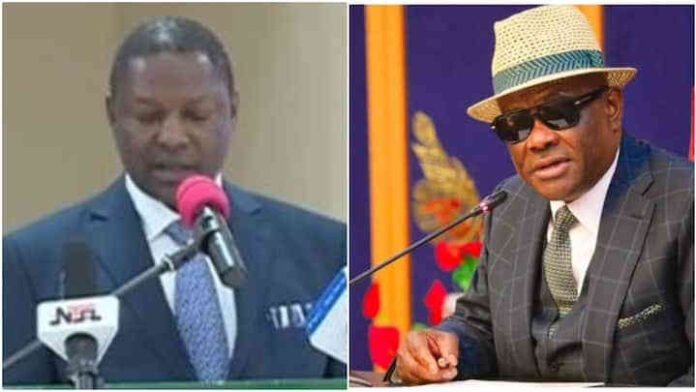 Wike is an unrelenting advocate of true federalism”: Malami confesses

Nyesom Wike, the governor of the state of Rivers, has received praise from Abubakar Malami, attorney general of the federation and minister of justice, for his support of the judiciary.

At the opening of a new law school that Wike started and finished in the state of Rivers, Malami referred to Wike as Mr. Project.

The minister of Justice made notice of Wike’s support for the state’s federal courts in addition to the law school.

Malami gave the governor a new name while praising him for accepting the challenge to raise the number of law schools in Nigeria to seven.

The newly constructed law school, which was started and finished by the governor in less than a year, was dedicated by the attorney general while he was in the state of Rivers.

The minister recalled how the conversation started in Yenagoa, the state capital of Bayelsa, and revealed that Governor Nyesom Wike has been in favour of federal courts in the region.

As said by Malami:

“Wike is a steadfast supporter of real federalism in Nigeria. I applaud your noble character and leadership.”

How many APC leaders has Wike invited to commission work in the PDP state of Rivers?

Recall that Wike, a governor from the Peoples Democratic Party, invited senior figures from the opposition and the ruling All Progressives Congress (APC) to commission projects in Rivers state.

Femi Gbajabiamila, the speaker of the house of representatives, is one of the APC leaders who have travelled to Rivers state to commission projects.

Thanks for using our platform to learn about the latest Naija News on Wike is an unrelenting advocate of true federalism”: Malami confesses