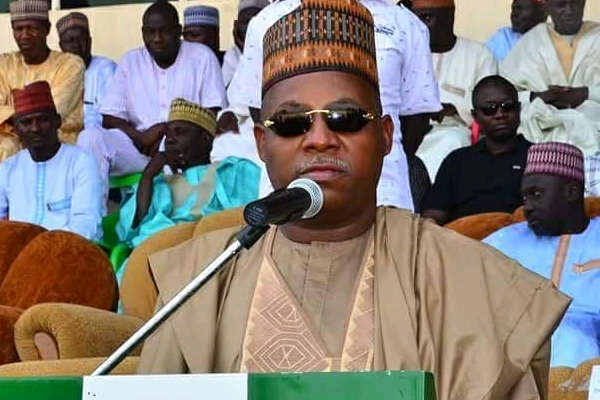 Details of how the vice presidential candidate of the All Progressives Congress (APC), Senator Kashim Shettima allegedly sponsored Boko Haram members to assassinate political opponents in Borno State have emerged.

In an opinion piece by Bolaji Mustapha titled, “The dirty side of Kashim Shettima, APC vice presidential candidate”, revealed that in January 2011, just one week to the deadline for the submission of candidates names to the Independent National Electoral Commission for the elections, the governorship candidate of the ANPP named Fannami Gubio and 7 others were gruesomely assassinated in Maiduguri.

Though, at first, when people thought it was a terrorist attack, it soon became clear that it was a well calculated political murder.

READ ALSO:Boko Haram Leader? The Dirty Side of Kashim Shettima, APC Vice Presidential Candidate That Has Got People Talking

In order to erase all doubts according to Bolaji Mustapha in the opinion piece, a Boko Haram suspect named Mustapha Kolo who was held in detention reportedly stated emphatically that Kashim Shettima was a prime sponsor of political assassinations in Borno.

He went on to mention some of the people they killed for him including Anwana Ngala and Fanami Gubio, the Borno State ANPP chairman and gubernatorial candidate respectively.

Part of the opinion piece reads, “Referring with disdain and contempt, to Wazirin Adamawa, Atiku Abubakar, and Labour Party candidate, Peter Obi, last week at a wishy washy event in Lagos, Kassim Shettima, the notorious APC vice presidential candidate tried to sell his equally dubious presidential candidate, a man who could not build a single hospital in Lagos as a man with ‘experience and track record’.

“But those who were clapping for him, did not appear to understand the desperate attempt by a terrorist sponsor and extremist of hate, violence and cruelty to distance himself, not just from his past but from his true person.

“In January 2011, just one week to the deadline for submission of candidates names to INEC for the coming elections then, the governorship candidate of the ANPP, Fannami Gubio and 7 others were shot dead in front of his father’s house in Maiduguri and the ANPP was forced to present Kassim Shettima as candidate.

It was first thought to be a terrorist attack but soon it became clear that it was a well calculated political murder. To erase all doubts, a Boko Haram suspect held in detention named as Mustapha Kolo, was reported to have said emphatically that Kashim Shettima was a prime sponsor of political murders and went on to mention some of those they killed for him including Anwana Ngala and Fanami Gubio, the Borno State ANPP chairman and gubernatorial candidate respectively.

“In similar circumstances to the murders perpetrated by Shettima on July 27 2006, Anthony Funsho Williams, a fearless and very popular PDP politician from Lagos State who was set to give the ruling AD a tough challenge for the Lagos governorship, was found strangled to death in his Ikoyi home.

“However, the worst atrocity in Shettima’s heinous history, was to come in 2014.

On March 12 of that year, the Minister of State for Education, citing security reports, advised Shettima as governor, to close down all remotely located schools in Borno.

“Not only did Shettima ignore this advice, but as if acting on cue, barely a month later, on April 14th, the Girls Secondary School, Chibok, was attacked by heavily armed terrorists who took away into the dark night over 276 young girls who had sought to educate and improve themselves in a state where education of the girl child was elevated to global priority.

“Against all protocol, the governor, Shettima failed to inform the president immediately by phone of this disaster and went on to employ so many other delay tactics of non-cooperation with the federal authorities. This ensured that the abductors had a free rein and smooth get away and that these young girls were successfully held as sex slaves and forcefully converted to their religion while many who refused to cooperate were outrightly slaughtered or seriously maimed: their future destroyed forever.

“On 30 May 2014, a civilian militia discovered two of the kidnapped girls raped, “half-dead,” and tied to a tree in the Baale area. According to villagers, Boko Haram abandoned the two girls, killed and buried four other disobedient girls. Later in the year, four more girls escaped after walking for three weeks. They claimed they were raped everyday in a camp in Cameroon.

In addition to this and to underline his sponsorship of this deadly tragedy, the principal of the Chibok School who was then under investigation for complicity was immediately appointed a commissioner in Shettima’s cabinet, an insult to the grieving parents, many of whom will never ever see their dear children again.

“It is instructive to underline that Shettima has never, till this day faced criminal indictment and prosecution for his role in this crime of untold proportion. It is unfortunate and totally regrettable that these two accursed criminals, of shady and slimy background are the best that could be presented by a political party as presidential candidates in a country that still has men and women of decency, competence and integrity.

“People like Shettima represent the most dangerous, the most deceptive and the most chameleonic terrorists of our time who deserve their fate, upon trial and conviction, should face execution by firing squad for the same heartless and wicked death he ordered and paid for that denied the families of Ngala, Gubio and the Chibok girls.

“It is even more of an insult when a devilish character of such ignominious putritude could assemble any audience to present himself in any iota of decency and worst still, to publicly seek to defame the public service record of others who in service to their people increased their human index potential, placing them as champions of education, industry and business all over the world including in the same Maiduguri where this heartless murderer rose to power by directly killing his people and indirectly supporting terrorism.

Man may be deceived for a while but the sordid deeds of gutter swine shall come to hunt them when they least expect. This time, the people of Nigeria have drawn the line against blood thirsty terrorists, drug pushing criminals and desperate killers disguising as populist politicians encouraged by their stolen wealth.

“The leadership of Nigeria will never be available to such villainous degenerates, highly reprehensible, offensive in character, nature and conduct. Men of corruption and dishonor. These people must be placed in the past where they have contributed to national failure or in the prisons where their devilish acts have booked them lodging. Never again in the seat of government because the people have this time risen to identify and totally reject them no matter what fascinated their audiences they try to sell their rotten and blood stained images.”