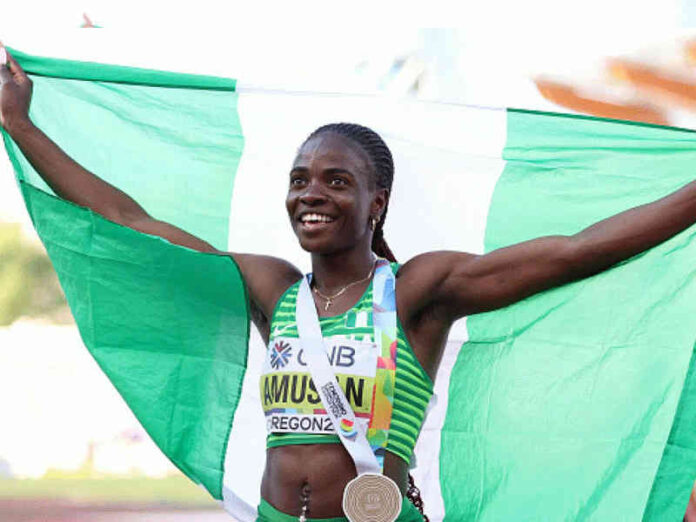 Tobi Amusan, a female Athlete from Nigeria, is one of the contenders for women’s world athlete of the year.

Amusan is joined on the list by sprinters Shelley-Anne Fraser-Pryce of Jamaica, Sydney McLaughlin of the United States, who won gold in the 400-meter hurdles, Yulimar Rojas of Venezuela, who holds the triple jump world record, and Kimberly Garcia of Peru.

In the women’s 100-meter hurdles this year, Amusan dominated.

In the semi-finals of the World Athletics Championships in Eugene, Oregon, in July, she set a world record time of 12.12 seconds, and she later won the gold medal in the final.

Fraser-Pryce improved her case for being regarded as the greatest female sprinter of all time by winning a record fifth world 100m gold.

In a season that saw a record seven sub-10.70 marks, the Jamaican, 35, also posted the fourth-fastest women’s 100-meter time of 10.62 seconds at the Diamond League in Monaco.

In addition to winning the 35km race and becoming a two-time world champion, the 29-year-old also set a South American record. Her time was two hours, 39 minutes, and 16 seconds.

The 23-year-old’s performance at the championship, where she also won gold in the 4x400m, saw her cut almost three-quarters of a second off her previous best time.

At the World Athletics Indoor Championships in Belgrade in March, Rojas won the triple jump with a new world record of 15.74m.

The 27-year-old Venezuelan later won gold in Eugene, Oregon, for his third consecutive outdoor world championship in the discipline.